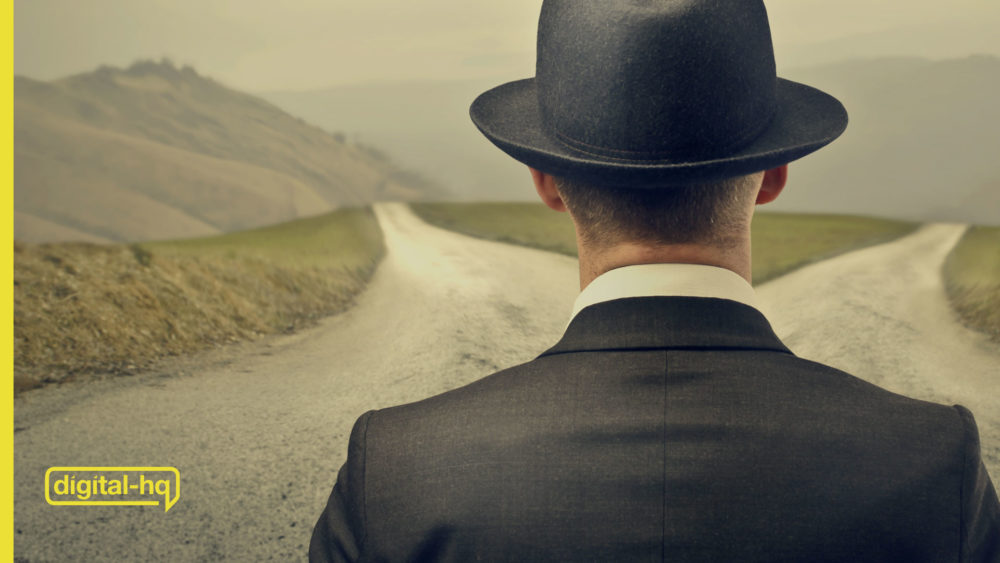 The future doesn’t just happen, it is created by those that set the pace. Digital innovation dictates what tomorrow looks like. The question we need to be answering is whether we are leading change, following change, or resisting change?

Some of the world’s greatest brands collapsed as a result of not recognising the opportunity to change.

We are at a remarkable point in time where every large oraganisation is at the same intersection.

A left turn [ Business as usual ] heads back to where we were almost two years ago. The workforce is all back in the office and work-life continues as it was.

A right turn [ Business NOT as usual ] heads forward towards the inevitable future, where teams are enabled to work from where they produce the best results, empowered by forward-thinking processes, digital tools, and workforce capability building that grows people and organisations.

Time has given us valuable hindsight perspective, yet we fail to learn from the past.
Instead of acting ahead of change we are reactive and learn more from our own mistakes when others have already made them.

When things fall apart we seek help from the very people that advised us in the first place.

Home movie and video game rental services giant, Blockbuster Video, arguably one of the most iconic brands in the video rental space. At its peak in 2004, Blockbuster employed 84,300 people worldwide and had 9,094 stores. Unable to transition towards a digital model, Blockbuster filed for bankruptcy in 2010.

Despite its early success in capturing a market that had few competitors, Polaroid was unable to anticipate the impact that digital cameras would have on its film business. Falling into the ‘success trap’ by exploiting only their (historically successful) business activities, Polaroid neglected the need to explore new territory and enhance their long-term viability.

The original Polaroid Corporation was declared bankrupt in 2001.

With the benefit of hindsight, Toys “R” Us may have led to its own undoing when it signed a 10-year contract to be the exclusive vendor of toys on Amazon in 2000. Amazon began to allow other toy vendors to sell on its site in spite of the deal, and Toys “R” Us sued Amazon to end the agreement in 2004. As a result, Toys “R” Us missed the opportunity to develop its own e-commerce presence early on. Far too late, Toys “R” Us announced in May 2017 its plan to revamp its website as part of a $100 million, three-year investment to jump-start its e-commerce business.

They filed for bankruptcy in September 2017.

Pan American World Airways (aka Pan Am), founded in 1927, was the largest international air carrier in the United States. The company was known as an industry innovator and was the first airline to offer computerised reservation systems and jumbo jets.

The downfall of Pan Am is attributed to was a combination of corporate mismanagement, government indifference to protecting its prime international carrier, and flawed regulatory policy. By over-investing in its existing business model and not investing in future innovations, Pan Am filed for bankruptcy in 1991.

A pioneer in its time, Tower Records was the first to create the concept of the retail music mega-store. Founded by Russell Solomon in 1960, Tower Records sold CDs, cassette tapes, DVDs, electronic gadgets, video games, accessories, and toys. Ahead of its time for a fleeting moment, Tower.com launched in 1995, making it one of the first retailers to move online. It seems the company’s foresight stopped short there as it fell prey to excessive debts and ultimately bankruptcy in 2004. Tower Records could not keep up with digital disruptions such as music piracy, iTunes, and streaming businesses such as Spotify and Pandora. Its legacy is remembered in the form of the movie ‘Empire Records,’ which was written by a former Tower Records employee.

After being one of the most important car manufacturers for more than 100 years, and one of the largest companies in the world, General Motors also resulted in one of history’s largest bankruptcies. Failure to innovate and blatantly ignoring competition were key to the company’s demise. As GM focused predominantly on profiting from finance, the business neglected to improve the quality of its product, failed to adapt GM to changes in customer needs, and did not invest in new technologies. Through a major bailout from the US government, the current company, General Motors Company (“new GM”), was formed in 2009 and purchased the majority of the assets of the old GM, including the brand “General Motors”.

At one time the world’s biggest film company, Kodak could not keep up with the digital revolution, for fear of cannibalizing its strongest product lines. The leader of design, production, and marketing of photographic equipment had a number of opportunities to steer the company in the right direction but its hesitation to fully embrace the transition to digital led to its demise. For example, Kodak invested billions of dollars into developing technology for taking pictures using mobile phones and other digital devices. However, it held back from developing digital cameras for the mass market for fear of eradicating its all-important film business. Competitors, such as the Japanese firm Canon, grasped this opportunity and have consequently outlived the giant.  Kodak filed for bankruptcy in 2012.

If hindsight is easier, we should use it when foresight brings opportunities to change.